Last summer, Internet-shaking events of cataclysmic import took place within weeks of one another. One, Google launched its social networking site, Google+. Two, in a long overdue move prompted by repeated denial of service attacks at LiveJournal, I switched this blog’s main venue to Blogger.

Had I anticipated the benefit of Blogger’s better analytics, I might have switched way earlier. Given the timing, those beautifully formatted traffic stats have mapped the incredible progress of links placed on Google+ as a driver of traffic to the site.

Social media links now bring the vast majority of readers to this site. The days of following a blog, either by RSS feed or repeated visits to an aggregator like the LJ friends page, are gone, at least for this virtual clubhouse.

At first, the three sites drove traffic to the site in roughly equal measures. This itself is amazing when you consider the brand-newness of G+ at the time. Since then Facebook’s share of that pie has shriveled to nearly nothing. Last week’s referring sites tally (as of Tuesday evening) ranks Twitter at 47%, G+ at 37%, and Facebook at a mere 6%. 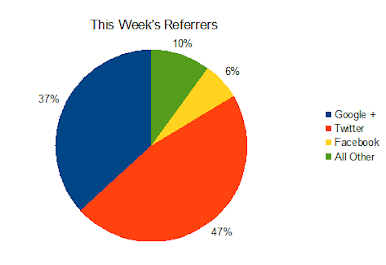 Twitter’s share goes up when a post gets a lot of play, as The D&DNext post did last week. Retweets evidently carry more weight than shares on Google.

By contrast, here’s the pie for the Blogger site to date: 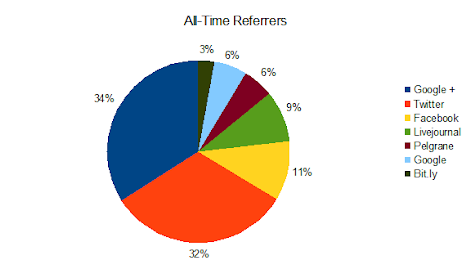 Here Twitter and G+ are nearly equal, with the newer platform actually squeaking out ahead of its blue-feathered elder. Facebook’s slice is bigger than in the weekly chart, reflecting its greater pull during the site’s first months. LiveJournal links are from the old site to the new; these have tapered off as readers have adjusted to the shift. The Google slice represents search results. I’m not sure whether the Bit.ly links are strays from my own social network links or were created by others.

What I conclude from this is that Facebook has fallen away as a mechanism for people like me to communicate with a broader audience. This is unsurprising; Twitter and G+ were designed for this purpose, where Facebook’s focus has always been on assembling, decompartmentalizing, and cross-pollinating your personal contacts. The surprise is how quickly the change effected itself.

What you might conclude from this is that if you are also trying to maintain contact with an audience and are not on Google+, you probably ought to be. I might enjoy some first mover advantage for having dived in right away, but it’s still early days for the new platform and there still appears to be mindshare to spare.