If I did, I would greatly care about the paying customers drawn to the convention by this programming.

I would not particularly concern myself with the desires of the folks who qualify to speak on its panels. They belong to a very large pool of people, too large for the program to accommodate. The goal of any programming track is not to assign status to panelists, but to serve the audience.

Attendees who make a specific point of going to multiple Industry Insider events more often than not are hoping to break into the industry themselves.

They are better served by newer or emerging voices who did that recently than by those of us who did it years ago, when conditions were completely different.

Sure, we graybeards can give you the immutable basics.

Let me do that right now:
(In that order.)

There you go. That’s basically it.

But the stuff about winning notice and getting assignments keeps changing, at a faster rate than ever before.

Panelists with somewhat less grey beards, or heaven forfend no beards at all, have the fresher scoop. While we weren’t looking, the biz became way too big to have heard of everyone. The name who broke in under your radar may be able to show you how to do the same.

And if you’re wondering what Ken is doing amid a slate of supposed whippersnappers, check out his photo on the Gen Con page. Clearly he’s used his famous time machine to bring a puppyish Ken from 1992 to labor on his panels, while the 2016 version kicks back in the Omni bar. Now that’s the way to do it! 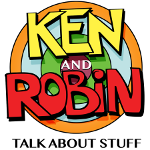 In the latest episode of our shining trapezohedral podcast, Ken and I talk treacherous trust, Starry Wisdom, M. R. James and non-standard UFO conspiracies.
Posted by Robin D. Laws at 10:11 AM No comments: