Events like Continuum, which began its life as a biennial convention twenty years ago, are supposed to reinforce the thesis of a hobby slowly aging out and losing steam. Tell that to the 26% of its 250 attendees who were new to the show this time out. Longtime stalwarts of the English gaming scene showed up in force, to once again affirm their love for Glorantha, Cthulhu, Pendragon and all expressions of the Chaosium diaspora. But the sign-up sheets offered a broad assortment of other tabletop RPGs, as freeforms unfolded several buildings down, and board games dotted the dining hall. This with a separate board game convention going on across the street, putting competitive pressure on the University of Leicester's curiously curtailed beer supply. 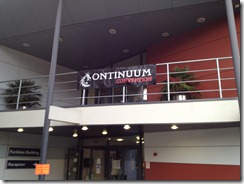 Among my three panels were the classic state of the hobby gaming industry chin-wag, which now has a brand new topic to bat around: Kickstarter and its implications. In the game design panel we talked about identifying the experience you want to create for the gamer, and how to build up from there so that every element of the rules set brings abut that experience. And in a general “Ask Robin” session I provided the origin stories of Feng Shui and Rune, traced the way editions of D&D have historically drawn in other developments from roleplaying design, and posited various possible shapes the RPG core rule book might take in a world of ubiquitous tablet computing.

Speaking of technology's bleeding edge, Greg Stafford beamed in from California via Google Hangout. Though a bum connection introduced frustrating pauses, he revealed to Pendragon fans the deep contents of a product pipeline, including a Charlemagne campaig 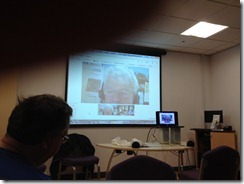 n book. He explained how his recent adventures as a horseman have granted him new insight into the Arthurian cycle, and spoke of his four decades of work on Glorantha as tracing his development from youthful naivete to maturer understanding. When he got to the historicity of Arthur, Oliver Dickinson was on hand to volley back at him in tart, affectionate counterpoint.

Ooohs interspersed with aaahs at the Moon Design seminar, as co-honcho Jeff Richard showed off gorgeous art and phone book-thick manuscripts for the long-awaited Guide to Glorantha book and a Sartar-set Orlanthi campaign. The profoundest gasps were elicited by a slideshow of maps for the former, which place every detail of Greg's originals, from elevations to the nimbus of the storm god's influence, all underpinned by a five-mile hex map. This act of cartography, executed by Colin Driver, can only be described as heroic, right down to its individually placed tree symbols. The map is not only stunning as a work-in-progress, but lays the groundwork for a zoomable 3D version! Moon Design's current surge lends this starry-eyed prospect an air of downright plausibility. On a more prosaic note, Jeff laid out his move to a hybrid business model, in which the company continues to makes its nut with direct sales to the hard core, but then opens a later release window, in which Cubicle Seven pushes the books out to retail stores. We also learned which nation of Glorantha embodies the death of sixties idealism, how the current team finally nailed mysticism as a path fun player characters can follow, and the geographical parallels between the Lunar and American heartlands.

The Hillfolk game reached a groove quickly and kept on rolling. Unusually for a one-shot run, it did not evolve into a battle over the chieftainship, but instead pitted a great raider's effort to start a war with a neighboring clan against the chief counselor's scheme to ally with them against foreign enemies. Our hot-headed warrior hero faced surprise comeuppance as a disregarded female hero of the clan laid a public thrashing on him, instigated by his prospective bride, a proud champion of the rival Hard Heads.

This time around I set aside the rule that steers a one-shot run to a definitive conclusion, instead concluding by saying, “And this would be the first episode of your Hillfolk series.” Ultimately I think this is the way to go with Hillfolk demos, since it is tuned for longer-term play than many narrative-oriented games. No one seemed particularly disturbed by the open-endedness, which gives a better look at DramaSystem in the mode it's tuned for. When run at cons outside the demo context, the final escalation rules probably remain the way to go. Or maybe closure is overrated in general, and players are happy to be left envisioning more.

As always when privileged to take part in an intense moment of community, I leave Continuum exhausted and grateful. Thanks to organizer Darran Simms, games organizer Keary Birch and panel poobah Colin Driver, along with the rest of the Continuum team. Their system of just-in-time organization makes for a loose and calmly run event. 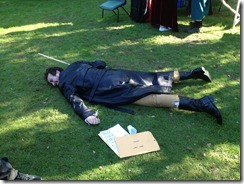