Oh no! In an attempt to mark the pre-order for TimeWatch, their new GUMSHOE game of temporal interference, Pelgrane Press inadvertently opened up a hole in reality allowing their evil counterparts from the darkest histories to come through.

These vile miscreants hail from an alternate timeline in which the entire run of the TimeWatch RPG was washed overboard during shipping. This catastrophe sent Simon and Cat over the edge into bottomless rage and nihilism, and Pelgrane Press became the most evil games company in the world. Now, the ruthless Evil Pelgrane works to undermine our timeline and ensure that their terrifying future comes to pass!

Only you can knit together the timelines by going to the above link and voting for either Evil Pelgrane, in which case the upcoming TimeWatch Resource Book will include a Time Crime heist against a Spanish treasure ship, or Good Pelgrane, instead endowing it with an adventure seed and illustration featuring TimeWatch members battling robot pirates. 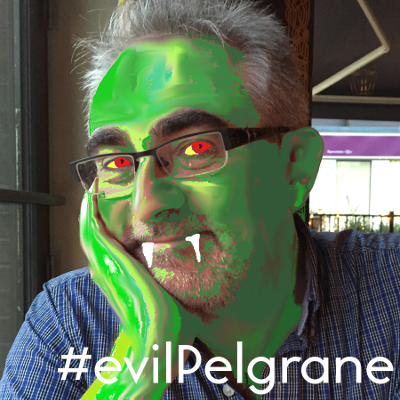 Why only just now I fought off my own time counterpart, vanquishing him forever. (Pictured above.) Thank goodness, because my annual journey to the Toronto International Film Festival starts tomorrow, and it would be weird to be posting my capsule reviews under an evil profile pic. Plus there’s no way I’m letting a lizard person purloin my festival tickets!

Other Pelgranes, however, still remain woefully affected, as can be seen from their use of the hashtag #evilPelgrane.

Only you can save them!