The Archer and the Beaver: A 15th Century Mugging 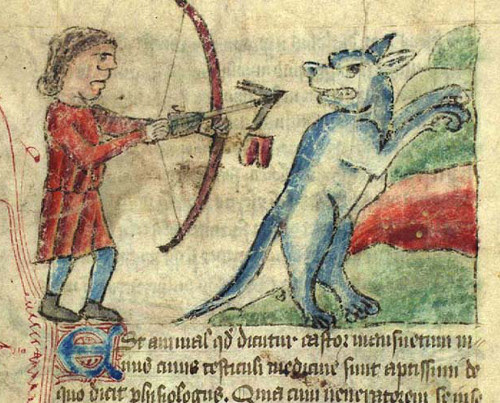 As you can tell just from looking at it, the above image from an early 15th century bestiary shows a beaver being held up by a hunter.

As the beaver well knows, the hunter wants only one part of him—his testicles. They contain castoreum, a precious oil.

Seeking to spare his life, the understandably miffed beaver has bitten off his testicles and flung them toward the hunter. These can be seen in the illustration, flying through the air between hunter and beaver, just below the former’s threatening arrowhead.

We can’t tell from the hunter’s grim expression whether he intends to keep his part of the bargain, or is concerned about his victim’s +9 (2d6+6) bite attack. If his veins pulse with the credo of the murder hobo, he may still fire that arrow, giving new meaning to the term “killing them and taking their stuff.”

Which is to say that in an F20 world, where dragons fly the skies and intelligent mushrooms may jump you when you go spelunking, it is important to depict the natural world in accord with all the latest natural history.

This serious article is in no way to blame for the above.