Dogs roll in carrion in pursuit of social status. Just like the rest of us.

My eponymous column shows you how to structure a GUMSHOE scenario around the characters’ defining investigative abilities. An Ashen Stars scenario serves as its illustrative example, also giving you a preview of that game. You'll also get a glimpse at the main cast of my in-house playtest.

But that’s not all! Kenneth Hite and Will Hindmarch present their afore-linked Fiasco / Trail of Cthulhu crossover. Ken reappears with a preview of vampire building from his upcoming game of blood-draining espionage, Night’s Black Agents. Simon Rogers rounds up current and upcoming Pelgrane releases. And Beth Lewis gives you the time-sensitive scoop on Pelgranic activities at the big show. Plus, you get to help name a rootin’-tootin’ western orc.

It all starts here!

The Repairer of Reputations

New York, 1920. A new day dawns. America celebrates peace and victory after repelling the German invasion of New Jersey. The cityscape has been rejuvenated and cleansed of foreign influence. And finally, 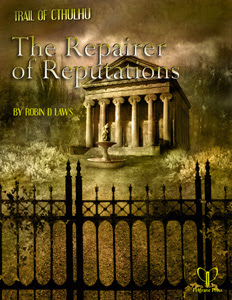 in accordance with popular demand, the government unveils its first public suicide machine. Yet beneath this placid surface hums a sinister conspiracy... one only you, along with your fine circle of upper-crust chums, can thwart.


The Repairer of Reputations

is a Trail of Cthulhu scenario by yours truly, based on the classic story by Robert W. Chambers, from his King in Yellow cycle.

Designed for one-shot play, it features a new wrinkle for GUMSHOE: on-the-fly, cooperative character generation.
Available in PDF only.