Open Licensing and DramaSystem (and GUMSHOE, too)

With the Hillfolk Kickstarter having funded both open licenses for DramaSystem and now GUMSHOE as well, it’s time to consult the stakeholders on just what the configuration of those licenses ought to be. Ultimately the decision will be mine (DramaSystem) and Simon’s (GUMSHOE), but we’re both on the same basic page in wanting low-hassle licenses that encourage uptake by gamers and commercial users alike.

(With GUMSHOE there’s a wrinkle concerning foreign languages. The games have been licensed to various territories, and Simon will respect the wishes of those publishers if they don’t want third-party GUMSHOE material published in their languages. That’s why the text on the Kickstarter site refers to the English language. At least some of our translation partners seem stoked about the open license, so we may be able to widen this out.)

Hillfolk backers made this happen, so I want to take your preferences into account.

Those of you who aren’t going to use the licenses or play the games, but are here purely out of abstract interest in open culture, will have only the steely rigor of your intellectual argument to fall back on.

The question at hand is whether to adopt an OGL, or OGL-like, approach, or to go the Creative Commons route—or a hybrid of both.

A Creative Commons attribution license that allows for mash-ups would be simplest for me. But that doesn’t require give-back the way the OGL does. Do you as Hillfolk funders want a give-back provision that requires anyone adding or modifying to the DramaSystem structure to also make their design work available on the same open basis as the core license itself? Or do you not care if someone designs a great new sub-system and then treats it as proprietary?

A CC attribution license with Share Alike doesn’t allow third-party publishers to cordon off the story elements of their products from the rules stuff, keeping their intellectual properties proprietary while letting the rules stuff enter the general use pool. When George Lucas wants to do his dramatic game of marital strife between Darth Vader and Natalie Portman, he can’t use DramaSystem under a Share Alike without backdooring Star Wars into the public domain. I’d love to see DramaSystem games based on existing properties, which requires the kind of carve-out the OGL allows for, where certain chunks are designated open content and others product identity.

Stalwart Wolf Clan member and open content maven Bryant Durrell has proposed a CC/OGL mash-up, the details of which I hope he’ll provide in a comment below.

Have at it, people, and don’t let the eternal enmity between Wolf and Lion deter you from speaking out in the name of all the badlands…

Ken and Robin Talk About Stuff: +4 Damage from Boat

Ken and I talk player ejection, ur-Call of Cthulhu, wrong opinions and the Cuban Missile Crisis in the latest episode of our award-seeking podcast, Ken and Robin Talk About Stuff.

Why DramaSystem Uses Cards Instead of Dice

Over on the Twitter, Jack Of Spades asked why DramaSystem uses cards instead of dice.

The answer is that as soon as you have dice in your resolution system, you have numbers on your character sheet. Since DramaSystem presents a new play style revolving around the way emotional interactions occur in fiction, I wanted to help gamers jump into it by pulling them out of familiar territory.

In the game (for those of you who have yet to sign onto the Hillfolk Kickstarter and get their playable draft copy), cards come into play only in the type of scene the game de-emphasizes. That’s the procedural, in which characters exert skills to complete external, practical tasks. In other words, the kind of scene we’re used to going to in roleplaying games. As they acclimate themselves to DramaSystem, most groups find themselves going to procedural less and less, invoking it only when it really matters.

As seen on its character sheet, DramaSystem is about the aesthetic of the word and not of the number.  In fact, arithmetic plays essentially no role in game play itself. You may compare numbers but you’re never doing even simple math.

(An exception occurs in the post-play bookkeeping phase, when the GM takes a vote and tallies the results, to see which two players get bennies they can use in subsequent sessions.)

While we seasoned gamers feel comfortable seeing numbers on our character sheets—maybe even adrift without them—it’s my hope that the simplicity of the system will allow you to draw in people who are interested in story but never put the words math and fun in the same sentence. (For example, the current stretch pitch for the game, Andrew Peregrine’s Jane Austen tribute Vice and Virtue, might be the perfect vehicle to suck in your book club.)

That’s also why I simplified the already not-crunchy procedural system further after playtest groups found the initial version out of keeping with the game’s overall feel.

Join Me on #RPG.NET Chat Tonight

I’ll be typing a storm at you on #RPG.NET chat at 8 PM Eastern tonight (Tuesday Oct 23rd.) I’m sure that Hillfolk and its ongoing Kickstarter will be the topic du jour. But feel free to ask me anything within my remit, from GUMSHOE to HeroQuest, from GM advice to podcasting.

To join #rpgnet chat: go to http://www.magicstar.net/chat2/, select your nick, log in, and type "/join #rpgnet".

Thanks to Dan Davenport for the invitation.

Ken and Robin Talk About Stuff: When Angels Tell You To Wife-Swap

The Birds: No One

Episode 10 of the Ken and Robin Talk About Stuff podcast is now available for your auditory enjoyment. Listen raptly as we discuss Hillfolk, Puritans, annoyingly inevitable game design, and a Tibetan Nazi space god.

Ken and Robin Talk About Stuff: Riesling and Dirigibles

The latest episode of the Golden Geek-nominated podcast that's sweeping the gamer nation, Ken and Robin Talk About Stuff, now wings its way toward your earbuds. Join us as we fling open the inaugural doors of the Cartography Hut to contemplate maps we have known and loved.

In a frenzy of construction, we then throw caution to the wind and cut the ribbon on Politics Hut, in which we look at the current US Presidential election from the Republican and Canadian points of view.

Ask Ken and Robin prompts us to consider: can comedy and Lovecraft coexist? (Thanks for the question, Monica Valentinelli.)

Finally, Ken faces his most daunting Ken’s Time Machine yet as Time Incorporated asks him to prevent Prohibition.

Response to the Hillfolk Kickstarter has been so overwhelming I haven’t had time to tell you how overwhelming it’s been. Things are moving faster than I can type this update. As of this writing, we’re at the 16 hour mark and are already 201% funded. The first two—no, make that three—stretch goals have been surpassed before I could even hype them. I thought I had a good store of stretches in my back pocket, but, no, you’re going to send me out on an immediate game guru harvest, aren’t you? Good thing I have a fat contacts list.

Now that you’ve shown me that you’ve come to throw down, I’m going to make it a little tougher on you (and buy myself a little recruiting time) by widening the distance between stretches a little.

$8500 gets us another Series Pitch: TS Luikart’s Malice Tarn, which he describes as King Lear meets Watership Down.

Then comes the $12,500 stretch goal: open licensing. If we reach this goal, I’ll release DramaSystem under a permissive open license. I’m open to input on the exact parameters of the license but want to err on the side of availability. The reference document will be a stripped-down affair, without the Hillfolk setting, examples, or Series Pitches, so those of you purchasing the PDF of the finished book will still be getting excellent value for your ten smackeroos.

Finally, there’s the all-important battle between the clans. When last our judges calculated the tallies, the Wolves pushed past a late night Lion offensive to once again grab the high badlands ground, howling in the glee of their victory. 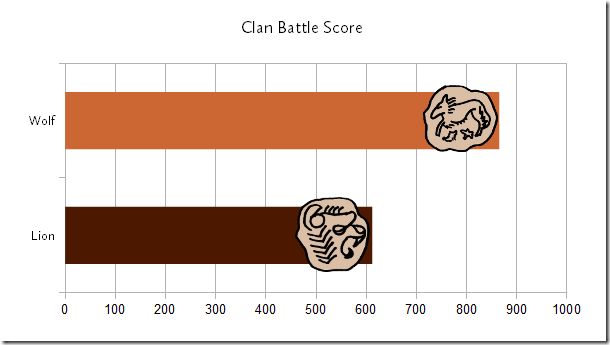 Are the clans, in addition to being a thinly veiled contention between cat and dog people, a proxy for a certain political struggle? Maybe so—the lions are fewer, but are drawn disproportionately from the ranks of high-ranking pledgers: your Chieftains and your Nabobs of the Northlands.

Fight the power, or be the power, by pledging to the Hillfolk Kickstarter today, and declaring your allegiance to Clan Lion or Clan Wolf.

After much preparation and furrowing of brows on the badlands, the clan council has decreed it: the Kickstarter campaign for Hillfolk has now gone live! Throw in with the Lion clan or the Wolf clan and help bring this labor of love from the manuscript stage to finished product. Backers of the project receive a complete draft text of the game, so you can get started right away. For much more on the game, the book, and the goodies, hop on over to the freshly activated Kickstarter page.

I’m absolutely gobsmacked—in a good way, naturally—to learn that the brand spanking new Ken and Robin Talk About Stuff podcast is already up for a prestigious award. Thanks to the gang at RPGGeek for the Golden Geek Award nomination.

Thanks are also in order for their nods to Kenneth Hite’s Night’s Black Agents, with rules by yours truly, in the Best RPG Category. And for their recognition of my game Ashen Stars for Best Artwork and Presentation. Congratulations to Jerome Huguenin, Chris Huth and art director Beth Lewis for this spotlight on their fine efforts.

My Pelgrane pals can also be proud of nominations for 13th Age for Best RPG, a signal accomplishment given that it’s only available in an electronic sneak peek form, and for Ken’s Bookhounds of London for Best Supplement.

As it would be crass to lobby those of you who vote for the awards to cast ballots for these nominees, I will merely sit here, casting significant glances in no particular direction.