LONDON —  I've added a few days to the front of my journey to the Continuum convention in beautiful Leicester to hang out at the Pelgrane's nest in London. Olympians are already arriving in the city by the Thames, so I expected crazy delays and ratcheted security at Heathrow. Instead it was the usual breeze. Later I hear that fear of Olympic craziness has deterred visitors, so much so that ticket sales to other London events like theater and the opera have dropped dramatically. My favorite feature of the coming festivities is an ad campaign on the tube admonishing locals to cheerily compensate for the wave of inconveniences to come.

I joined Head Pelgrane Simon Rogers for a lunch in celebration of the company's epic 10 ENnie nominations, with contributors to nominated projects Beth K. Lewis, Steve Dempsey and Paula Dempsey modestly basking in the fruits of their labors.

Then Simon, Steve and I hove off to soak in some visual research for Dreamhounds of Paris, heading to the surrealist section of the Tate Modern's standing collection. Dali's lobster telephone was in storage, perhaps to make room for a Hirst exhibit, but we did see suitably inspirational canvases by de Chirico, Ernst, Man Ray and others.

Having escaped a heatwave back home, I was relieved to stroll through a cool drizzle to the John Soane Museum. This famed apogee of the imperial collecting era fills a house to mammoth concept drawings from the architect who gathered all this stuff, along with decorative pieces and artifacts from Egypt, Greece, Rome, China and probably others. Upstairs are the paintings by Canaletto, Watteau, Turner and Hogarth; downstairs is the crumbling alabaster sarcophagus of Pharaoh Seti I. 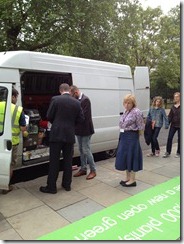 As entertaining as Soane's vast accumulation of stuff was a drama witnessed as we waited in the queue to get in. Workmen were in the process of sticking a lime green tribute to the city governments Olympic tie-in greenery initiative on the high-end sidewalk slabs right outside the museum. A pinstriped museum official leapt to his mobile phone to argue down the functionary on the other end of the line without ever once quite saying the word hideous. (It was implied in his emphasis on the lime in lime green.) Finally aesthetic logic won out over political self-promotion, and the Soane, now under renovation and promoting the Olympics with its own cross-promoting exhibit, was spared. Workmen rolled up the offending banner and drove away.