Who Haunts the Dreamlands?

Playtest feedback for Dreamhounds of Paris, the upcoming Trail of Cthulhu campaign sourcebook in which you play the major figures of the surrealist movement wreaking –psychic-revolutionary havoc in Lovecraft’s eerie fantasy realm, is in. Participants should pat themselves on the bat for a collectively great job. They’ve turned in detailed, thoughtful responses that will make the book better. This must have the highest ratio of comments made to comments used of any project I’ve received playtest feedback on.

Because the campaign strongly encourages you to play real historical figures, supplied for you in the book, we can do a fun thing that doesn’t usually arise from playtest reports. We can see who the most popular of the 20 supplied characters were, and in what proportion. Here’s the breakdown for the six most chosen characters, in handy pie chart form. 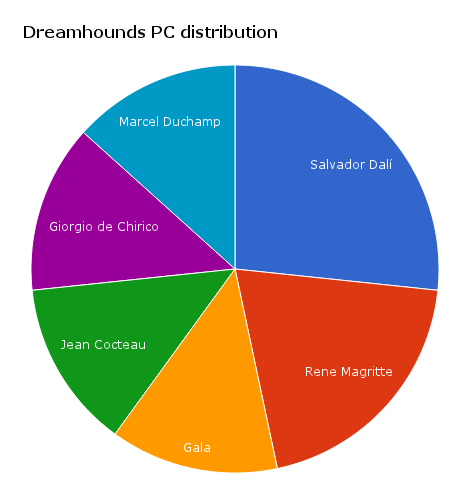 Clearly, seeing to it that you have Dali or Cocteau along is the Dreamhounds version of making sure somebody’s playing the cleric.
Posted by Robin D. Laws at 10:55 AM No comments: