For the fiction writer, the process of having one’s work illustrated serves up anxiety by the bucket load. You are not only at at a remove from the art direction process, but often out of the loop altogether. Instances of character images being shaped more by inattentive illustrators than the text abound in genre literature. And that’s for novels. The idea that you’d have significant input into a short story cover lies beyond the silver veil of authorial dreams.

That an artist would take it on himself to communicate with the writers of a short story collection, taking heed of their input and making adjustments accordingly—why, that’s got to be a crazy myth, on the order of the unicorn. That the artist would then labor to include every single lead character in a collection of fourteen—often with sidekick? Why, that’s a chocolate unicorn riding a platinum unicorn atop a prompt cable installer.

Unless we’re talking Gene Ha, in which case it is just Gene being Gene. Here’s his cover for Stone Skin Press’ The New Hero 2. 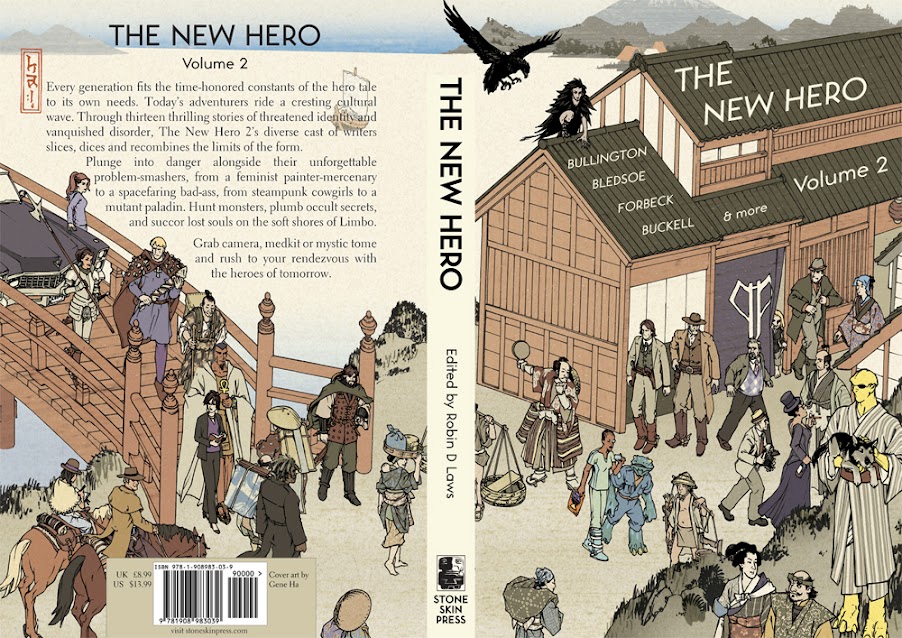 As part of our deal when I agreed to sign on as Stone Skin’s Creative Director, Simon Rogers required that I occasionally include my own stories in these anthologies, no matter how unCanadian that might make me feel. The yellow dude with the German shepherd is Longthought, my mutant hero of the semiotic apocalypse, from the story “Among the Montags.”