If it’s the first Thursday after Labor Day, it must be time for this blog to veer abruptly into all Cinema Hut, all the time...or at least for the next eleven days, as my wife and I once again plunge into our endurance-challenging celluloid staycation, hitting the Toronto International Film Festival for all it’s worth. Tonight kicks off with a Werner Herzog death row documentary and Danish pre-pubescent delinquents, and ends on Sunday Sept 18th with a day 60% devoted to Japanese madness and mayhem. In between we’ve got Cuban zombies, Norwegian punks, and Korean Kazakhs. Provided all goes according to plan, I’ll be checking out new works from Johnnie To, Ann Hui, Shinya Tsukamoto, Michael Winterbottom, and other past favorites.

This is my 25th year doing the festival in earnest, which was back when it was called the Festival of Festivals. This seems mathematically impossible.  I guess they let two year olds attend back then. It was a different time.
Here’s the standard drill, if you’ve forgotten how it works around the Cinema Hut at TIFF time or are joining the festivities for the first time:

I’ll be writing capsule reviews of everything I see, and then gathering them up in order of preference in the festival’s aftermath. Until then, I’ll be giving provisional ratings to the films, which are bound to change as they settle into memory. Ratings range from 0 to 5, with 0 arousing my active ire and 5 ascending to rarefied heights of masterpiece-dom.

Interspersed between the capsules will be expansions on the reviews, stray observations, and whatever logistical complaining I fail to suppress.

If you’ve heard of a release that’s playing TIFF, chances are that it’s because the film will be coming out shortly and is getting a big PR push. I tend to skip films that have distribution in place in favor of those I might never get another shot at. So I’m not the one to ask about the Oscar-bait movies with the big stars in attendance.

Do you want to see these movies right away? Well, these titles are beginning their long journey through the distribution chain. Many will continue to appear on the film festival circuit over the next year or so. The high profile releases I tend not to schedule at the fest may appear in theaters as early as next week. Indies and foreign titles will score theatrical releases over the next year or so, and DVD releases after that. Some may appear only on DVD, or vanish completely.

While a few of last year’s films still await theatrical release, most have made it through the chain. So if you want to enjoy some fine cinema right away, you could do worse than to check out my recommendations from last year.
Posted by Robin D. Laws at 3:30 PM No comments: 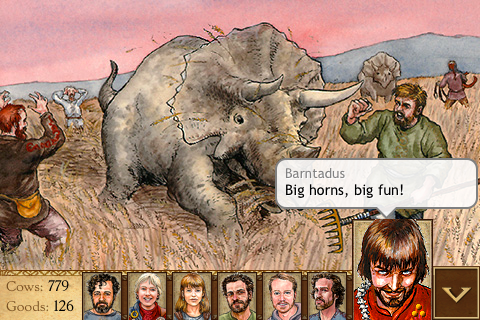 The original game became a phenomenon in Finland, for cultural reasons that seem both obvious and elusive. Now that a new era of gaming has dawned on portable devices, it’s time for the rest of the world to catch up and get building their shrines to Lhankor Mhy. Now, if you’ll excuse me, I have a feud to prosecute against the accursed, dog-loving Herani…
Posted by Robin D. Laws at 9:20 AM 1 comment: