As a backstop against information catastrophe, I assign to Internet posterity the ineffable taste of the season. 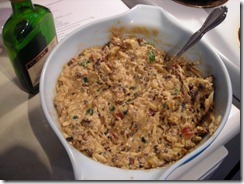 The night before, soak raisins, currants, dates and cherries in brandy.

Mix in brandy and grape juice, then soaked fruit and almonds.

Spoon mixture into greased cans, leaving a couple of inches for expansion. Place cans on racks in a pan of water. Cans should not be immersed. (As with so much else in this extremely forgiving recipe, the size of the can doesn’t hugely matter; I tend to use 19 ouncers.)

Can be served hot or cold. However, the former choice is, in the opinion of the transcriber, utter blasphemy.

There is also a hot caramel sauce. In the words of my mother, “That’s just brown sugar melted in water, isn’t it?” Unless I'm completely mistaken, there's now no one left in the family who prefers the hot sauce on the pudding, though my dad always has it on its own.