Blood of the City 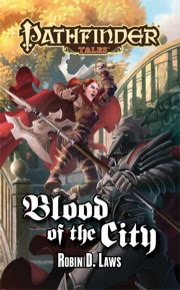 Paizo has announced my next novel for their Pathfinder Tales fiction line, due in August. Here there be sell-text:

Luma is a cobblestone druid, a canny fighter and spellcaster who can read the chaos of Magnimar's city streets like a scholar reads books. Together, she and her siblings in the powerful Derexhi family form one of the most infamous and effective mercenary companies in the city, solving problems for the city's wealthy elite. Yet despite being the oldest child, Luma gets little respect—perhaps due to her half-elven heritage. When a job gone wrong lands Luma in the fearsome prison called the Hells, it's only the start of Luma's problems. For a new web of bloody power politics is growing in Magnimar, and it may be that those Luma trusts most have become her deadliest enemies...

Thanks to the Paizo marketing department for upgrading me from legendary (as per the equivalent text for The Worldwound Gambit) to visionary.

Blood of the City stands alone from the previous book, though there might just be a wee crossover tucked in there.... It eschews the present tense a faction of Worldwound readers found worrying, in favor of the fantasy-standard past tense. Proceed to mourn or celebrate, as your tastes dictate.

Place your vengeance-soaked pre-orders at the product page.