A few weeks ago I was fortunate enough to gather a great group of players to test Hillfolk via the Google+ multi-webcam Hangout feature. Here’s how it went.

Like any poorly designed experiment, I was trying out three things at once:

First of all, we had a fun time, leaving group members hoping for a follow-up—which my schedule unfortunately doesn’t quite permit. Maybe we can get the band back together in the event of a quorum failure for my in-person Thursday night playtest.

#1 went fine. The rules felt simpler and easier to explain even given the complication of displaying tokens and playing for online play.

In the case of item 2, I stripped the rules back even further than for the one-shot I ran for the Pelgrane gang in December. My conclusion is that the game still works without key elements, which is nice to know, but doesn’t offer quite as broad an experience. The written section on one-shots will recommend a suite of features closer to the previous run.

Similarities between the two runs suggest that by default a single-session game develops into a power struggle to destroy and replace the clan chieftain. This offers a clear narrative everyone can take part in, and a definitely shaped conclusion. It works and it’s fun. But I’ll need to add some text showing the GM how to direct the storyline in other directions, so you can play in multiple one-shots without having them all follow the same dynamic.

Thoughts on #3: the Tabletop Forge app, which I used to present the flow of tokens and cards, and create a simple graphic allowing us to remember who was playing who, proved invaluable. At present its interface hearkens back to the clarion days of chat, with command lines and all. The creators of the app are planning a crowdfunding campaign enabling them to add the needed UI interface and other features. As this tool becomes more robust, so will Hangouts as an RPG platform.

One remains at the mercy of each participant’s computer and peripherals, especially where sound quality is concerned. A couple of the players fought with choppy audio streams and had to repeat themselves a lot, which impeded the flow.

Because it consists almost entirely of dialogue between characters, DramaSystem felt like an ideal match for the platform. Despite the kinks, I’m happy to be able to mention this in the rules as a viable way of getting a group together, for one-shots or the longer-term play the game is tuned for.

On the Isle of the Cyclopes, the One-Eyed Man Wants To Kill and Eat You 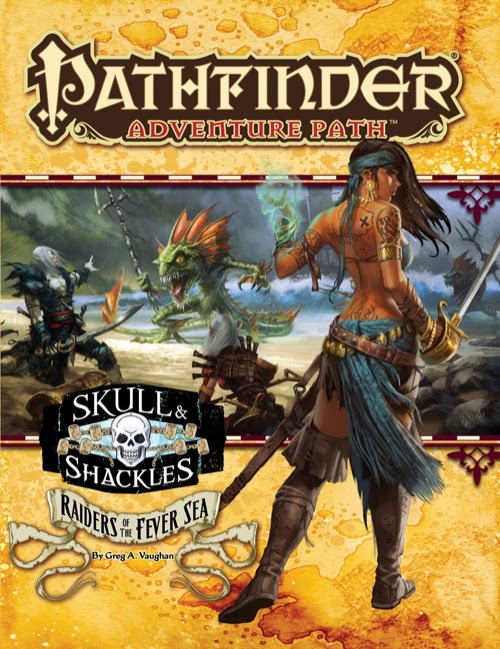 Raiders of the Fever Sea, part two of Paizo’s Skull and Shackles Adventure Path, is now raiding its way to your purveyor of fine game products. Included among its high-grade swashbucklery is part two of my serialized novella, “The Treasure of Far Thallai.” In “Butcher’s Rock,” captain Challys Argent and her unwilling sidekicks journey to Butcher’s Rock, so named due to its shape, and its population of ravening cyclopes. Furious battle and grim prophecy ensues. For more info, sail your galleon to Paizo’s product page.