With the holidays in the rearview mirror, it’s time for another Hillfolk progress report. I continue to receive great contributions from stretch goal writers ahead of the Jan 31st deadline. This grants me a useful head start, one I’m sure I’ll need when February 1st rolls around and the task of assembling the full books begins in earnest.

Jason L. Blair’s “Inhuman Desires” delivers the promised paranormal romance in sterling fashion. It doesn’t let death get in the way of a tortured love story.

Meguey Baker’s “Under Hollow Hills” pours on the faerie atmosphere, bringing an evocative prose voice to her series of intrigue among the fae, and the humans caught on the thorny boundary between their realm and ours.

Jennifer Brozek’s “Transcend” brings the post-human condition to the dinner table, letting you explore the consequences of radical transformation either on a future Earth or in the social hothouse of an orbiting space station.

Graeme Davis has swashed his buckles with “Pyrates”, bringing the time-honored crime gang drama to the blue waters of the piratical Caribbean.

If you prefer your epic drama under the waves, Richard Iorio has turned in “Dolphins.” Just like he said, it bridges the moods of Finding Nemo and Lord of the Rings.

Compelling human storytelling occupies a smoldering center stage in Greg Stolze’s “Fire in the Heartland.” What is it like to serve as first responder in a community so small you know everyone you’re ever called on to rescue?

Also, I received an early Christmas present in the 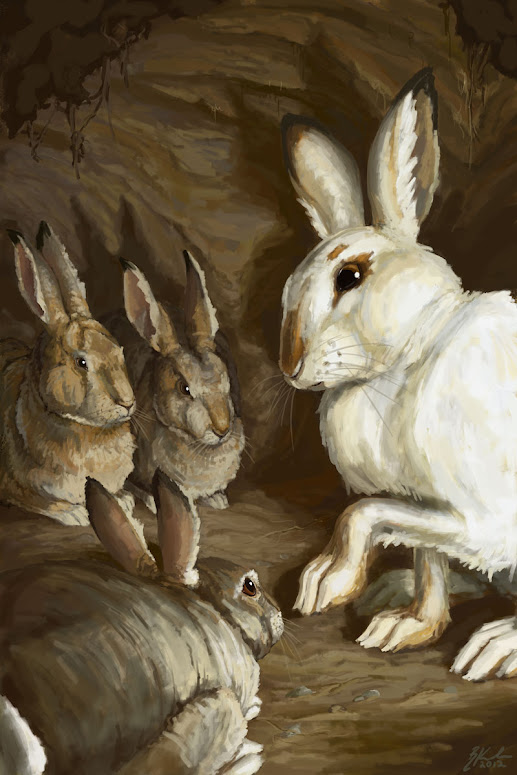 form of a completely unexpected, ready-to-print series pitch from an RPG heavy hitter I’m not quite ready to announce. This luminary’s surprise participation gives me leeway in the unhoped-for-event of a drop out from an announced series pitch contributor. For the moment I’m keeping both the name and the concept under my hat.

Contributions from Ash Law, Emily Care Boss and Pedro Ziviani have arrived and will be reviewed over the next few days.

Meanwhile, I’ve completed work on the reference document for the DramaSystem open license. This will allow us to release it concurrently with the book.

Art contributions are beginning to roll in.  I’m very pleased with what I’ve seen so far and am confident that you will be, too.  As a teaser, at right is Rachel Kahn’s illustration for TS Luikart’s “Malice Tarn.”