Ken and Robin Talk About Stuff: A Big Can of Time Worms

In the latest episode of our well-wrapped podcast, Ken and I talk mummies, Tudor retirement, legal redress and George V vs the Flying Dutchman.
Posted by Robin D. Laws at 8:58 AM No comments: Links to this post

In the mid 90s, The Far East Theater was the site of much inspiration for Feng Shui and Shadowfist. It’s been closed for many years, but now the Ascended have finalized their plans to tear it down for yet more condos. 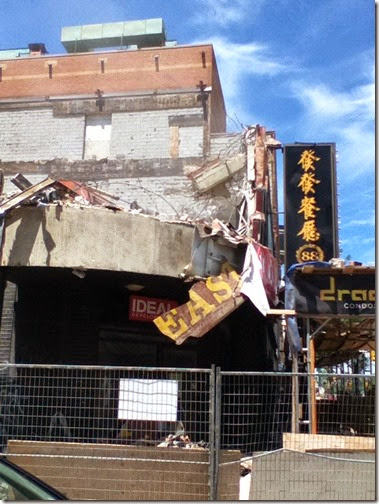 Posted by Robin D. Laws at 11:12 AM No comments: Links to this post

Click here for the complete strip archive.
Posted by Robin D. Laws at 9:07 AM No comments: Links to this post

Ken and Robin Talk About Stuff: The Simpering Bridegroom

In the latest episode of our windswept podcast, Ken and I talk St. John's, spotty attendance, The Castle of Otranto and Ed & Lorraine Warren.
Posted by Robin D. Laws at 9:09 AM No comments: Links to this post

Click here for the complete strip archive.
Posted by Robin D. Laws at 9:01 AM No comments: Links to this post

In the latest episode of our submersible podcast, Ken and I talk sunken Dunwich, Gulina Karimova, professionalism, and saving Anne Boleyn.
Posted by Robin D. Laws at 9:08 AM No comments: Links to this post

Click here for the complete strip archive.
Posted by Robin D. Laws at 9:00 AM No comments: Links to this post

It is with surprise and gratitude that I pass along the text of this press release, in which it is announced that Hillfolk has made the longlist for the 2014 Diana Jones Award. I very much want to see DramaSystem make its way into the bloodstream of tabletop roleplaying, and greatly appreciate the opportunity to spread the word this most prestigious nomination brings.

I also owe mountain-sized thanks to the game’s 2185 Kickstarter backers, whose essential support allowed us to expand the project’s scope beyond my wildest expectations.

To be nominated such stellar games and entities as ROFL, Terra Mystica, Evil Hat and Paizo adds further luster to this true honor.

Two publishers, a hobby game, a family game and an RPG
vie for hobby-gaming's most exclusive trophy.

From a long and extremely diverse long-list of nominees, the secretive committee of the Diana
Jones Award has distilled a shortlist of five items that it believes best exemplified ‘excellence’
in the field of gaming in 2013.

The Diana Jones committee is proud to announce that the shortlist for its 2014 award
for Excellence in Gaming is:

EVIL HAT, a publishing company run by Robert Donoghue and Fred Hicks
Ever since the release of FATE as a free RPG in 2003, Evil Hat Productions has aimed at two
usually difficult goals: skill and elegance in game design, and professionalism and transparency in publishing. Honesty and openness about business realities, and excitement and perfectionism about game possibilities, built the Evil Hat audience from a corner of the
Internet to a loyal horde numbering in the tens of thousands. From Don't Rest Your Head
through Happy Birthday Robot, Penny For Your Thoughts, Diaspora, and Swashbucklers of the 7 Skies, Evil Hat has combined the key features of a design house and a best-of-breed imprint while nurturing its core FATE system through three major editions without forking its player base. By co-creating Bits and Mortar, Evil Hat pioneered PDF-retailer cooperation; using the Open Game License and Creative Commons, Evil Hat built on a tradition of trusting players and designers to build better games. In 2013 Evil Hat hit both its design goals and its
deadlines with FATE Core: five books Kickstarted, printed, and delivered, and over 60,000
copies sold. And FATE Core is still a free RPG.

HILLFOLK, a role-playing game designed by Robin D. Laws (Pelgrane Press)
The Hillfolk Kickstarter asked for $3000 and offered a 96-page softcover; it raised $93,000
and delivered two full-colour hardbacks filled by some of the brightest names in story-game
design. But it only happened because of the game-engine at the heart of Hillfolk: Robin D.
Laws’s DramaSystem, an elegant and clever take on group storytelling that puts gameplay and
competition on an equal footing with structured narrative and individual creativity. Hillfolk
and its sister-volume Blood on the Snow showcase a leading ludonarrative designer at the
height of his powers, and inviting his friends to come and play.

PAIZO PUBLISHING, a publishing company run by Lisa Stevens
One of the hardest things in business is to unseat a market-leader, particularly when that
market-leader created the entire field, but 2013 was the year when word spread that Paizo's
Pathfinder RPG was outselling Dungeons & Dragons. It’s official: Paizo has used the OGL
and a single-minded commitment to talent and quality to create a better D&D than D&D. Its
achievement only seems extraordinary to those who don't know CEO Lisa Stevens’
extraordinary track record in the games industry, from Lion Rampant through White Wolf
and Wizards of the Coast. Paizo's ability to raise $1m to crowd-fund a Pathfinder-based
MMO in January 2013 was simply the apple at the top of the industry's new tallest tree.

ROFL!, a family card game designed by John Kovalic (Cryptozoic Entertainment)
In game design nothing is harder than simplicity, and in no category is that quality more
required than in the family/party game space. With the brilliant, elegant and delightful
dynamic animating ROFL!, designer John Kovalic provides a masterstroke of the KISS
principle. Just as amazingly, he does it by finding an original take on the word game sub-genre. ROFL!’s phrase compression conceit rewards both clue-making and guessing, supplying an essential skill-levelling element many party games lack. And if that weren’t enough, he somehow inveigles tabletop’s most beloved cartoonist to lend it the light, joyous visual look that its play style demands. Though created by someone steeped in the adventure game tradition, it could and should appear on shelves at mass-market retailers wherever they are found. GRTGMJK!

TERRA MYSTICA, a strategy board-game designed by Helge Ostertag and Jens
Drögemüller (Feuerland Spiele/Z-Man Games)
In the land of Terra Mystica dwell 14 different races in seven landscapes, each bound to its
home environment. Each race must terraform neighboring landscapes into their home
environments in competition with the others. It's a brilliant piece of state-of-the-art design:
there are no stunning new mechanics here but the game takes a number of clever, intriguing
systems and combines them in a bravura piece of game-creation to build a sublimely engaging
experience.The game emphasizes strategy over luck, rewards planning, and provides a huge
amount of delightful replayability.

PRESENTATION
The winner of this year’s award will be announced and the Diana Jones trophy will be
presented at the annual Diana Jones Party, which will be held at the Cadillac Ranch, 39 West
Jackson Place, Indianapolis, at 9pm on 13th  August – the night before the Gen Con games
convention opens to the public. All games-industry professionals are invited to attend.

ABOUT THE AWARD
The Diana Jones Award for Excellence in Gaming was founded and first awarded in 2001. It
is presented annually to the person, product, company, event or any other thing that has, in the opinion of its committee, best demonstrated the quality of ‘excellence’ in the world of hobby-gaming in the previous year. The winner of the Award receives the Diana Jones trophy.
The Diana Jones Committee is a mostly anonymous group of games-industry alumni
and illuminati, that includes designers, publishers, cartoonists, consultants, and some content to rest on their laurels.

Past winners include industry figures such as Peter Adkison and Jordan Weisman, the
role-playing games Nobilis, Sorcerer, and Fiasco, the board-games Dominion and Ticket to
Ride, and the website BoardGameGeek. Last year's winner was Wil Wheaton's webseries
Tabletop. This is the fourteenth year of the Award. More information is available at www.dianajonesaward.org.

Posted by Robin D. Laws at 5:50 PM No comments: Links to this post

Ken and Robin Talk About Stuff: The Werepig Demographic

In the latest episode of our rumor-busting podcast, Ken and I talk info asynchrony, fearmongering as tradecraft, Jeff Richard and voodoo.
Posted by Robin D. Laws at 9:07 AM No comments: Links to this post

Click here for the complete strip archive.
Posted by Robin D. Laws at 9:02 AM No comments: Links to this post