You asked for it, you got it. New Tales of the Yellow Sign, my upcoming collection of short stories inspired by the classic weird tales of Robert W. Chambers, will be available not only in ebook format, but in a print edition from Atomic Overmind Press. I’m happy to 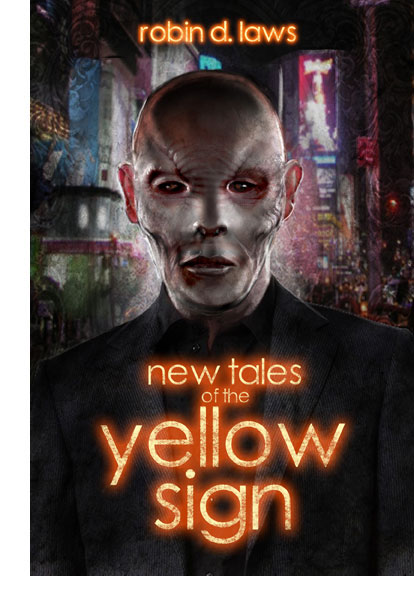 be able to accommodate the reading and collecting habits of the bibliomanes among you, and proud to be part of a line including Kenneth Hite’s Tour de Lovecraft and Cthulhu 101. Adding to the bragging rights, New Tales represents Atomic Overminder Hal Mangold’s first foray into straight-up fiction.

The print edition is scheduled for a September 2012 release, but we’ll sneak some advance copies to Gen Con, allowing attendees there the first shot at forever blasting their fragile mental conditions.

Once we go from cover mock-up (seen here) to finished cover, I’ll get the wheels in motion on ebook distribution. This is my first adventure in that format, and I’ll keep you updated as the electronic version wends its way to market.

Here’s the announcement text, as also found on the Atomic Overmind site.

In the dying years of the 19th century, a book changed the world—or worlds. A slim, sinister text called The King in Yellow drove those who read it to madness. Despite suppression by anxious authorities, it spread through global culture, and history itself, like a virus. Now the contagion bears hideous fruit.

Poison and beauty lie before you, in any color you want.

Sterilize your suicide chamber, harken to the remorseless clicking of your black box, and whistle for the monstrous creature that lives in your basement. The pallid mask awaits.

All of these New Tales of the Yellow Sign orbit lost Carcosa, black star points poked through the white scrim of consensus reality by the force of Chambers’ book. But each swings past on its own trajectory, a mix of styles and concerns in counterpoint to Chambers’ unified “Gallic studio atmosphere” of the Yellow Decade. Each story launches itself in fugue from one (or more) of Chambers’ originals, passages that Laws plays adagio or largo on different instruments, plays for modern dancers and not Victorian wallflowers.

– Kenneth Hite, from his Foreword

New Tales of the Yellow Sign is a 170-page trade paperback from Atomic Overmind Press, acclaimed publishers of Tour de Lovecraft: The Tales, and Cthulhu 101.It will release in September of 2012, with a preview release at the Gen Con Indy 2012.

The novels of author and game designer Robin D. Laws include Pierced Heart, The Rough and the Smooth, and The Worldwound Gambit. Robin created the GUMSHOE investigative roleplaying rules system and such games as Feng Shui, The Dying Earth, The Esoterrorists and Ashen Stars.

Atomic Overmind Press is an Alexandria, Virginia-based publishing house, founded in 2008. The Overmind and his creative partners are dedicated to bringing the best in esoteric science-fiction, fantasy, horror, fringe culture, and hobby gaming to a global audience.

Posted by Robin D. Laws at 9:37 AM No comments: Links to this post